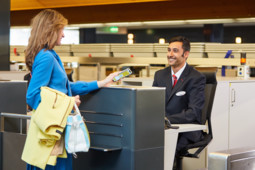 Ireland’s newest regional airline, Emerald Airlines, has selected Swissport as its ground services provider for several key airports across the UK. As the exclusive operator of Aer Lingus Regional, Emerald Airlines recently accelerated its commencement of operations in the UK, with services commencing from 16th March 2022.

Under the agreement with Emerald Airlines, Swissport is expected to support approximately 12,500 flights annually. Passengers also benefit from the ease of connecting to more than 60 UK to US routes on Aer Lingus’ transatlantic network via Dublin Airport, where they can take advantage of the US Immigration Pre-Clearance facility.

“We are delighted that Emerald has chosen Swissport as its ground handling partner in the UK,” says Jude Winstanley, Managing Director for the UK and Ireland at Swissport. “We’re very proud to see a new brand come to the market and to have their trust in our expertise and world-class team.”

Commenting on the announcement, Choorah Singh, Director of Operations at Emerald Airlines, says, “We’re very pleased to be entering a partnership with Swissport and look forward to working together to ensure the safe, secure and efficient ground handling of our passengers and aircraft in the UK.“

In the UK and Ireland, in addition to growing its business with new and existing aviation partners, Swissport is getting ready to support its customers across 27 airports. As pandemic restrictions continue to ease, the world‘s leading provider in airport ground services is preparing for the expected accelerated recovery of global air traffic.